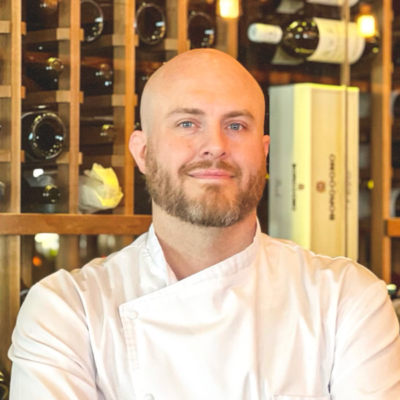 Chef Scott was born and raised in the New England region but has lived in various areas around the country. His 23 years of culinary experience began at the age of 15 with his first job working at McDonald’s. He continued working in the food industry at several pizzerias until he landed his first line cook job at a full service restaurant, The Quechee Golf Club in Vermont. It was here that he began “earning his stripes” in the kitchen.

His travels around the country provided vast culinary experiences working with luxury resorts and restaurants such as the Equinox, the Sanderling and Lowes Ventana Canyon Resort. Over the past few years he had the privilege of working and learning with renown chefs such as Daniel Humm (Eleven Madison Park), Daniel Bould (Daniel, The Dinex Group) and most recently David Burke. He helped open over 25 restaurants so far in his career, most of them while working with Chef David Burke.

In 2021 he was invited to compete on the Food Network as a contestant on the show Chopped. In January of 2022 Scott joined the Bonura Hospitality Group as the Executive Chef at Blu Pointe. We are excited to welcome Scott to our team and look forward to his vision leading the culinary team into the future.

Our dock is open for the season