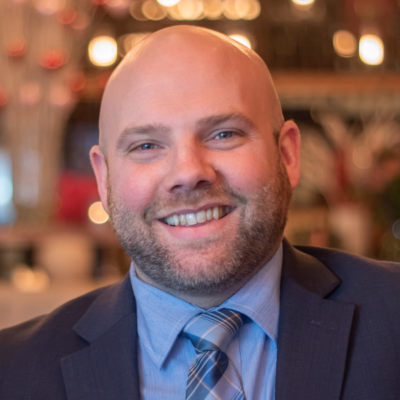 Jeffrey began his passion for the restaurant industry at the age of 16 when he got his first job as a Busser at Torches on the Hudson. At this time his main concern was making enough money to pay for a car and he had no clue what was on the horizon. Growing up as a student athlete he always had a competitive nature and a love for the fast-paced action of sports. Starting a job in a 400 seat full service restaurant, with no previous experience, presented so many challenges and daily obstacles. He would have to quickly to learn how to adapt and overcome.

In a short amount of time his interest grew in understanding how the food service operation worked. He would find himself at the end of the shift asking questions like, “How did we just serve food for 1200 people?” Furthermore, his curiosity of the ingredients, cooking techniques and the wild culture in the kitchen became the most attractive parts of his job. After working five years in the kitchen as the main Expeditor and then Sous Chef, he was afforded the opportunity to head back to the dining room where it all began. Over the next few years he worked his way up to the Assistant General Manager.

Although he was starting to achieve success in his career, he felt that he was missing a critical part to his foundation in the restaurant industry. In 2011 he decided to step away from his job and pursue a degree in culinary arts at the world’s best culinary school in Hyde Park, NY. While completing his A.O.S. degree at the Culinary Institute of America he worked with Chef/Owner Laura Pensiero as a server and bartender at her Gigi Trattoria in Rhinebeck. Laura is huge supporter of the connection between farmers and restaurants which opened his eyes to a whole other dimension. In 2012 he was afforded the opportunity to do his externship with James Beard Award Nominee Chef Eric Gabrynowicz and partner Stephen Mancini. Both Gabrynowicz and Mancini, previous employees of Danny Meyer at Union Square Hospitality, fostered a culture of farm-to-table cuisine and enlightened hospitality. These experiences would later prove to be both critical and extremely influential in the development of Blu Pointe.

In 2014 he was offered to return to the restaurant where he “grew up” in the industry. However this wouldn’t be the same restaurant he once bussed tables in. Joseph Bonura Sr. was completing his purchase of the property with plans to renovate and create a Manhattan-like atmosphere featuring his love for quality ingredients and market fresh fish. For one year Jeffrey worked with the Bonura family creating the concept we all know as Blu Pointe. Learning the core values of Bonura Hospitality in combination with his now fortified culinary experiences, Jeffrey was able to create a concept with a location unmatched throughout the Hudson Valley. Blu Pointe has expanded the core values of hospitality group, with the addition of a Wine Spectator Best of Award winning wine program 5 years in a row. Jeffrey now seeks to offer the same growth and development he was afforded throughout his career through his new manager in training and apprenticeship programs. The entire Blu Pointe management team is looking forward to a bright future with Bonura Hospitality.